PUPPIES
We hope to get puppies in summer   2017  from our beloved Tosia.
Tosia is beutifull and very healthy bitch (HD A, Eyes OK) she is a sweet companion. If you are interested, just send an email to lucynaweijers@gmail.com. 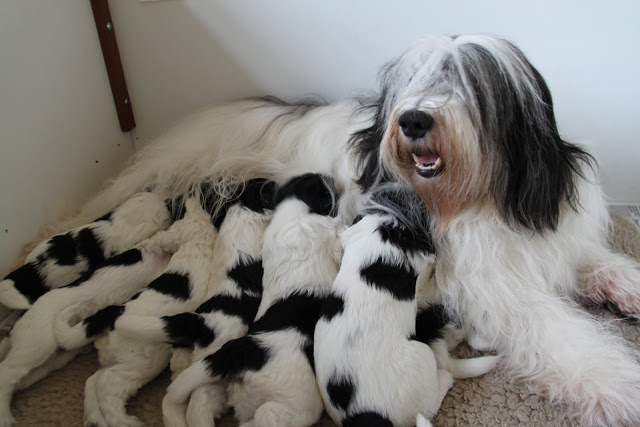 ABOUT US
We are a small kennel and have no more then 2 dogs. I, Lucyna was born in  and ever since my childhood I love dogs and all kind of other animals. My first dog was Aga, she was a hybrid PON (Polski Owczarek Nizinny) from the asylum. She was a lovely dog that had a rough life before we got her and therefore was a bit timid. My love for animals has influenced me in my choice for college education: I studied technical zoology in . My plans to work on a big farm never really worked out, this is because I met my husband Philip when celebrating holidays in  in 1981. We got married and I moved to  in 1982 and live here ever since. We have two children: Stefan and Karolina.

I registered a name for my kennel. Every puppy born in my kennel will get the kennel name Z PONLANDII. This is an aggregation of two terms. The polish term for someone from Holland is “Z Holandii”, so when your dog “PON” is from Poland your dog is “Z PONLANDII”. 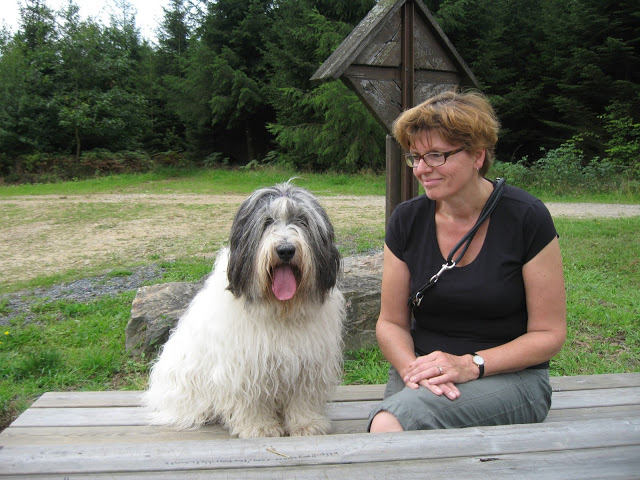 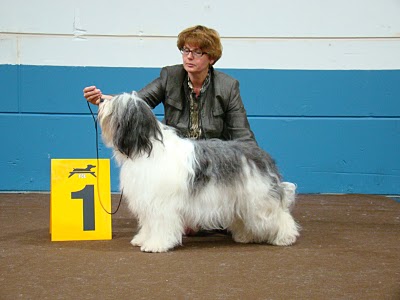 Internationaal Champion
Dutch Champion
Luxemburgs Champion
Best puppie Kampioens Clubmatch Pon Club Nederland 2008
Best puppie Jongehondendag Pon Club Nederland 2008
Bitch of the Year 2009 Pon Club Nederland
Rheinlandsieger
4x CACIB
3x res.CACIB
5x CAC
4x res.CAC
1x CACL
BOB
Club Diploma Obidience A,B en C
Obidience Certificate Beginners Exellent
Obidience Certificate 1 degree Exellent
Obidience Certificate 2 degree Very Good
Dobra is a dog out of thousands. She is very healthy, is doing well at shows and is excellent in obedience. She is afraid of nothing, is at ease in every situation and very stable. Very friendly to everyone, is crazy about children and she adores us and the people she knows. She likes to be hugged and, on our invitation, she even sits on your lap. She listens very well, and can walk anywhere, is socially towards other dogs. Too pushy dogs are kept at a distance with a short bark and only young pups are not quite liked by her. She is very targeted at us and does fine in obedience competitions. At home she is completely dominated by Zosia and as such she knows well what her place is in the pack.
She was a good mother for her first litter and all pups enjoys her free and lovable character. She is worshipped and spoiled by us and she knows that very well. As the first of our dogs she managed to relax next to me on the couch lying down.

The Polski Owczarek Nizinny is often called PON in . In  the PON is called Nizinny or Polish Sheepdog. The name PON is literally translated as “the polish sheepdog of the lower countryside”, which is in contrast to the Tatra dog, a sheepdog in the . This breed has its origin in farmer dogs which worked as sheepdogs in the lower countryside of . The PON breed does not exist so long and is officially recognized in 1963. 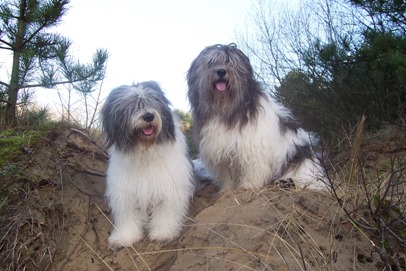 The PON is an average sized dog (bitches 42-, dogs 45-), which is strongly build (my bitches weigh around 20 kilo’s). The long hair, which covers the body, gives the dog a characteristic look. All colours of the fur are permitted. Most occurring is white with gray (at the time of the birth the pup is white-black), grey (the pup is black) and beige (the pup is brown). Very rare are the black or brown furs. The eyes are covered with hair, but the hair of dogs with a full fur can be tied in a knot or be cut a little.

The tail of a Nizinny was always very short docked, which gave the dog a beautiful round look. Now that docking tails is prohibited in  (and some other countries), it is a bit weird to get used to a Nizinny with a tail. Our dog Zosia had a tail, which we far more prefer. The tail is mostly shown in upward position (happy) and the Nizinny has therefore a nice look. It’s fine to see that some Polish breeders are now also following the line of keeping the tail.

The Nizinny is a real sheepdog, very focused on its own people, the dog’s own pack. The PON are quick learners, the raising of the dogs present no problems, but happiness, especially when one undertakes actions with the dog. They like obedience, agility and flyball. A nice walk with the owner and the family is also appreciated. The Nizinny is good in getting around with kids, especially when the dog is raised in the presence of kids. Inside the house the dog is quiet, but from time-to-time the dog acts as a clown to the pleasure of us all. Most Nizinny’s are a bit shy with foreigners and do not welcome a stranger. The boss and the family are dearest to them, for which they do anything.

There is so much literature about the personality and the looks of the PON that it is too much to recapitulate all. I will limit myself to elaborate on the topic of fur care. Someone choosing for a dog like a PON usually likes the beautiful fur a lot. But such a fur needs a lot of care. The fur needs to be brushed once a week, even when you don’t have a lot of time or when on holidays. I usually use a brush with large bristles and two combs, one with large and one with smaller pins. I always brush my dogs on the table, I use a mat so the dogs won’t slide away and are safe. My dogs always need to lie down on their side and are pretty comfortable this way. They don’t mind being in this position.

I always start with their feet and slowly go up. I make sure every layer of hair is brushed before I use the comb with the large teeth so I can take care of the hair all the way down to the skin. Most dogs don’t like their legs to be brushed but for most of them, brushing their back is heaven on earth. Important places that can’t be forgotten are behind the ears, inside the legs and the inside the armpits where tangles are likely to occur.

My first real PON was Misia (Heca Misia Xandrina). She was brought from  by my parents when she was just a few weeks old. Unfortunately she only reached the age of 6. She was very friendly and outgoing, and was very tolerant to our children. After Misia passed away Bajka entered our life (she is now eleven) and since 2 years we can enjoy the presence of Zosja in our household (2 years old).

Our Bajka (Elba Bajka ze Sto Drugiej) was born in  on February 6, 1994. When she was young she visited a few shows. At a clubmatch in June 1995 she managed to finish first in a competition for young dogs (15 bitches participated), and at a clubmatch in 1998 she was judged by the breed specialist Mr. Redlicki from  and acquired a very nice grade. She almost was allowed to proceed into the final round.

Bajka was a relatively large bitch with a beautiful fur and with a personality that is typical for a Nizinny. She enjoyed being with family or close friends she was familiar with (she loved it when my mother from  was here on holidays), but when caressed by strangers she looked at me in the eyes as if she was trying to say: “is this REALLY necessary?”.

Bajka was excelled in obedience on different tests and earned grade A and B with great ease, she was the best in her group! She always accompanied us on holidays and never had problems with adapting to new circumstances. As said earlier she was a typical Nizinny, she could be very crazy, she used to play “catch me if you can” with the children around the table, she tried to bury her bone in the chamber (underneath the bank or under a pillow) and she could “smile” (raising her lips and thus showing her teeth) when she was happy or shy. She is sadly already passed away. 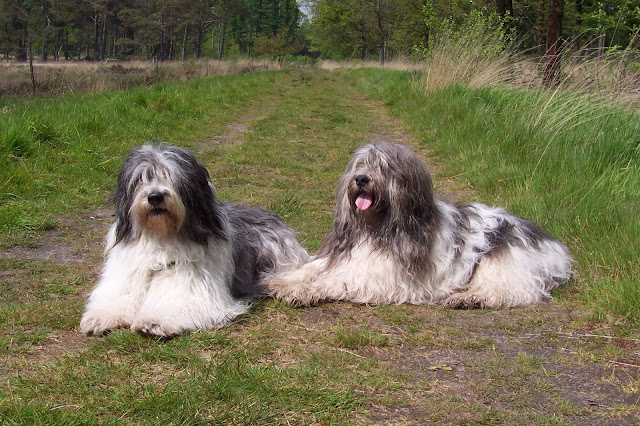 Zosia (Azosia) was born on February 23,  . Her father is the famous Zagon z Wielgowa, her mother Wanoes Gizmo van Isala Situm is a daughter of the famous dog Fornal z Gangu Dlugich. Zosia has already visited some shows with the following results:


Zosia has HD A, which means she doesn’t suffer from a hip displacement. . She is also free from Pra and Cataract. She has been approved by the Dutch Nizinny club for breeding purposes.
Zosia is a sweet and affectionate bitch, less reserved than Bajka, the only thing she wants is love from the family and other people she is familiar with. She is very playful, loves to be hugged, is very sweet to Bajka and loves playing with her, and she can adapt to new circumstances very fast. She is very obedient and a fast learner. With great ease she managed to get A, B and C grade very fast. Also she acquired her first official Cynophilla Diploma GG 0 (Behavior and obedience 0), she was assessed “excellent”! We have also GG1 en GG2 certificate. It is my first dog that has progressed to such a high level but I and Zosia still can’t get enough of it. By working with me so much she is very much attached to me, this is very moving.
She pased away in juli 2012. 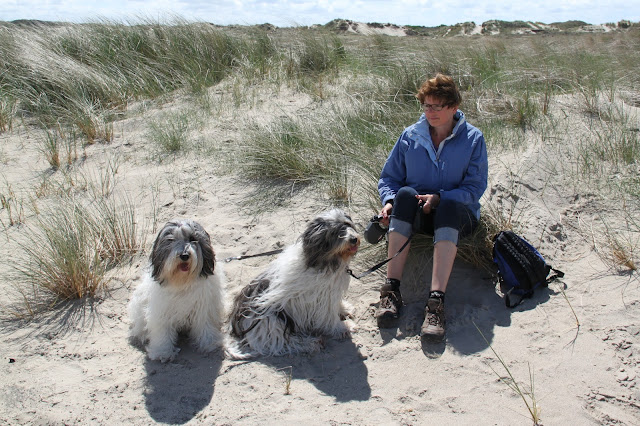